“It’s my 10th New Zealand Cup week and I’m very excited about what it will bring,” says the 40-year-old.

“It only seems like yesterday that I came to New Zealand from Australia not knowing what to expect,” Mark said.

“I was made to feel very welcome by the Kiwis in my first Cup week although it was full of nerves for me.”

“But I got through it okay and nowadays I am part of the woodwork” he said.

He has been in residence since August 2009. An Australian, Sydney born, it now seems likely Mark McNamara’s voice will be gracing the Addington and local airwaves for as long as he sees fit to stay in New Zealand.

Vivid memories remain of the first call Mark McNamara made in Christchurch on opening day (1 August) of the 2009 Grand National jumping carnival at Riccarton Park. The race was the Sydenham Hurdles over 3,200 metres, Mark’s first experience of calling a jumping race (he had another to come, the 4,150m Koral Steeplechase later the same day) when Mr Charlton led home the nine horse field.

“My wife and I were on course for the day and once the race had been run, we turned to each other and said words to the effect of “he’ll do us”.

Certainly, if you were sight impaired, had your eyes closed or were listening on the radio, you would have been able to place exactly where your horse was positioned throughout the race. Every horse was clearly accounted for and the delivery was as if McNamara had been calling at Riccarton for a lifetime. Even better when he made his way to Addington and began his harness commentaries for patrons, he clearly established himself as New Zealand’s current leading harness racing caller and a world class one at that.

Mark has been commentating for more than 20 years starting out with the 2KY/Sky Channel racing team after leaving school were he was understudy to his mentor Kevin Thompson. In the seven years before moving to Christchurch, he was race caller at Newcastle, Bathurst, Canberra (still showing as the race caller on their website in 2014!!), Goulburn & other NSW tracks and a familiar figure as a race day/race night studio presenter. For three years (2007 – 2009), McNamara and Greg Hayes were ambassadors for the NSW Carnival of Cups series. As the inaugural commentator for this series, it resulted in three years of travelling around NSW to feature meetings in most corners of the state, having a great time and meeting great people. Phantom race calling is another area Mark McNamara has been involved with, especially for the Black and White Ball in Sydney which he did for a number of years.

Since moving to Christchurch in 2009 and being employed by the New Zealand Racing Board, Mark has taken over race calling at all Canterbury, North, Mid and South Canterbury (essentially Kaikoura to Timaru) harness racing and thoroughbred meetings. He called a number of Central Districts galloping races (Trentham/Awapuni) following the resignation of Tony Lee in late 2012 and continues to do so occasionally. He commented that ‘it was strange’ watching Addington after calling an Awapuni meeting earlier that afternoon. His latest North Island foray came recently with the Stratford Trotting Club’s meeting at their Te Kapua Park venue in late February 2016.

Mark  has had an eventful time in Canterbury since his arrival. He married his long time partner, Katie, who had worked for the Harness Racing Weekly at HRNZ; co hosted the Harness Racing Awards with great mate Greg O’Connor (Trackside presenter) in both 2010 and 2011, something new to him which he enjoyed doing; hosted Canterbury Regional Awards; has appeared on The Box Seat (Fence Talk); raced horses from Mark Jones’s and Stephen McNally’s stables; was calling proceedings at both Riccarton (Labour Weekend Sunday 23 October 2010) and Addington (23 December 2011) when significant after shocks from the swarm of earthquakes Christchurch experienced from September 2010 occurred; put together racing syndicates and to cap everything off the McNamara’s celebrated the arrival of their first child, son William Chase (5lbs 11 oz) in mid February 2013, to be followed by daughter Bronte in July 2015.

Mark finds time to return “home” to Australia, in particular for the Eugowra Carnival of Cups where he called Beetson home first in the Lexus of Parramatta 2012 Canola Cup, in 2013 Holy Camp Clive, in 2014 Holm Three   and in 2015 Oh I Am The One. Katie McNamara attended in 2012, assisting with judging the fashions on the field competition.. Whilst the Bathurst Gold Crown meeting holds fond memories, as far as special atmosphere goes Eugowra has what no other track in Australia has according to Mark.

It is comparable to the special one off nature of the annual Kaikoura Cup meeting at South Bay racecourse in NZ that he is particularly passionate about. Mark remains a tragic but dedicated Cronulla Sharks Rugby League fan for which he receives not inconsiderable grief at times. 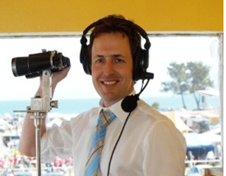 Horse ownership is one “disease” that has afflicted Mark. He raced a number of horses in Australia, with no stars but the better ones included:

Kate Shannon – 2002 Artiscape/Olgas Niece filly bred by late Bryce Buchanan, PF and M Neil in NZ, exported to Australia in November 2003. Her impressive record reveals 15 wins/18 placings from 69 starts, $52,575, 1:54.7TT, 2:00.6MR at Bathurst, her favourite track where multiple wins were recorded… Bernie Hewitt trained her and drove her in to win on fourteen occasions.. His son Jason (JT Hewitt) was successful on the other occasion.

One of Mark’s favourites was a horse purchased from Victoria that he had a share in called Shutthe Fridge door (1995g Golden Greek/Finalize, overall record 4 wins, $13,800, 2:02.8) – a two win horse for McNamara (Newcastle in consecutive weeks in August 2001) but with the “coolest” of names.

Since arriving in Christchurch, Mark has taken a direct personal interest and involvement with a number of horses, some more successful than others.. A passionate harness racing owner, he has utilised the services of Mark Jones in this regard and a brief rundown of his NZ winners in addition to Champagne Franco/syndicate horses (see later) reveals :

Anita Patron – “maybe the one that got away“, (2006f Badlands Hanover/Anna Patron (1:55.0US)) was purchased from Burbeck Harness Bloodstock Ltd (Ron Burrell and Don Raisbeck) after her first two placed starts. Mark organised the purchase and remained in the ownership through the next few starts. Anita Patron won first up for her new owners at Addington repeating the dose five starts later also at Addington for Mark Jones. McNamara shortly after this relinquished his part ownership. She went on to win a further three races and has to date left an unnamed Rock N Roll Heaven filly.

In the breeding stakes, Mark McNamara together with Cavalla Bloodstock is breeding from Miss Moonlite Shadow an unraced Christian Cullen mare from Sirius Flight 1:54.2US (out of top race mare Pacific Flight, 9 NZ wins, 38 US wins, 1:51.2US, $562,345 ), winner of 5 in USA, dam of 2 2:00 winners in Timeless Perfection (7 wins) and Malak Uswaad (9 wins) in NZ. She is the dam of unraced 2yo Mr Sharkey (2013c Four Starzzz Shark), owned by Steve Thompson and Grant Dickey; Schweinsteiger (2014 yearling colt Falcon Seelster). In addition, Champagne Franco (2008f Falcon Seelster/Crusader Franco), part owned by the McNamara’s and the winner at her first of only two starts at Rangiora on 18 December 2011 (tr/dr Mark Jones) is being bred from. She is Mark McNamara‘s pride and joy, having been his most expensive ever purchase but unfortunately injuries curtailed her race career. Her 2014 yearling filly Sabering is by Sir Lincoln while her 2015 weanling filly is by Changeover. Katie McNamara shares in the ownership of these two fillies.

As already mentioned, Mark has put together public harness racing syndicates. YOR! racing – short for Your Own Racehorse. This syndication package was for a two year period. Horses were to be trained by Mark Jones. Initial returns from Pacing Delight (injured/returned to breeders), Hikoi (didn’t make the grade) and Kate Stephanie (three starts for best placing of fifth) were mixed to say the least. A subsequent lease of then 4yo mare Curve (Courage Under Fire/Sly and Stylish, from the family of Sly Flyin, 1:53.6AUS, $903,705), provided the syndicates first winner at Forbury Park on 6 June 2013 (6 starts for syndicate for a first and a third). Machs A Flyin who moved from the Purdon stable had three wins and a couple of placings for Mark Jones after his acquisition late in 2013/14 season (Addington Met Multiplier reward winner). Another syndicate called YOR! Racing with Boes McNally, leased Ataahua Tiki (2006f Elsu from six win mare Rangatira) from Mrs Christine (CM) Watson. Ataahua Tiki managed a win in an Amateur Drivers race at Motukarara and three placings for the syndicate. Other syndicate horses organised by Mark have included : Crazy Heart (Santanna Blue Chip/Belle‘s Girl) mare who from two three year old starts from the Mark Jones stable won a 1700mM fillies and mares race at Forbury Park in a 1:57.4MR before her export to Australia; Pats First Sun (Sundon/Go Pat) trotting gelding, another Forbury Park syndicate winner for Mark Jones and 8yo Sundon trotter/gelding Danske (out of Thanx) who has won at Forbury Park and Rangiora and been placed on four occasions to date for the Danke For Coming syndicate, again trained by Mark Jones.

Mark has done a fair bit of driving over the years, this commenced at Bathurst where he was resident commentator and often stayed with one of his best mates Jason Turnbull. Stable rules applied if you were staying, you had to help out, this naturally led him into driving, something he enjoys and has continued to drive track work since his arrival in Christchurch.

Personal highlights : for Mark, feature meetings are always highlights whether they be New Zealand Cup Week, Bathurst Gold Crown Carnival or his absolute favourite meeting, the annual Kaikoura Trotting Club race day. Of all the races he has seen, Smooth Satin winning his fourth Bathurst Cup in 2005 (also 2001, 2002 and 2003) after having been retired two years prior made for a night of high emotion.

Personal lowlights as a commentator come when calling a horse the wrong name. Like all commentators it has happened before and will happen again, as Mark says hopefully not for a long time. The mixing up of Arctic Fox and Soldier of Love at a Riccarton meeting is still fresh in the mind.

And of the 2018 Cup week Mark is picking the Australian visitor Tiger Tara to win the New Zealand Trotting Cup at Addington on Tuesday and Te Akau Shark to claim victory in the Couplands Mile at Riccarton next Wednesday.